For the last decade, she has been collaborating as independent curator with several institutions, galleries, art centers and artist-run-spaces such as the Galerie des Galeries, Galerie Allen in Paris, Air de Paris with which she collaborated from 2013 to 2017, Institut Français as jury of international residencies, Shanaynay, Moins Un, La Salle de Bains. She has also organized screenings and lectures, at Laboratoires d’Aubervilliers and the Photographic Center of Île de France, as well as regularly contributing to publications in the specialized press dedicated to contemporary art in France (02, Code Magazine, Slash Magazine ) as well as in the context of artist monographs.

In 2017, she founded furiosa, an independent project based in Monte-Carlo dedicated to the promotion of contemporary art and curating in the Principality of Monaco and internationally.

In the spring of 2018, she was in residence at Cripta 747 in Turin and has since joined its selection committee. In 2019, she received a curatorial fellowship from Institut Français as part of the Sur Mesure 2019 Program.

I Simply Never Get Lost in the Story, FURIOSA, MONACO

Always Someone Asleep and Someone Awake, GALERIE DES GALERIES, PARIS

HOW DEEP IS THE OCEAN, SHANAYNAY, PARIS 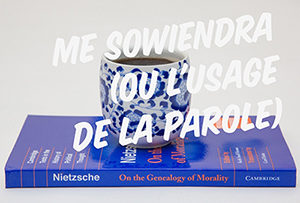 AND TO END, MOINS UN, PARIS

EVERYTHING GOES NOT ANYTHING, MOINS UN, PARIS